Last month our Site Engagement Librarian Donna Ballan attended the Victorian Popular Fiction Association’s Victorian Animal Encounters Conference at the University of Portsmouth. Two of the papers discussed nineteenth-century illustrations of ‘insect women’ in the satirical journal Punch. Intrigued by these peculiar depictions of women ‘fashioned from nature’, Donna decided to take a closer look at our own collection of Punch to discover what these illustrations reveal about contemporary attitudes towards Victorian women and female fashion.

The Knitting Reference Library at Winchester School of Art holds issues of Punch dating from 1841 up until 1951, and I have to admit, these volumes are some of my favourite items in the collection. Punch provides a fascinating (and sometimes strange) window into Victorian humour and political satire.

In just one volume of Punch (1869 – 1971), I quickly found several examples of women  wearing fashion formed from both insects and animals. In part, these illustrations are an attempt to critique and ridicule nineteenth century women’s fashion by presenting it as something frivolous and absurd. The Victorians were fascinated by nature and natural history, and as the V & A’s new exhibition Fashioned From Nature demonstrates, this fascination was incorporated into contemporary dress. One of the most famous examples of this is Alice Comyns-Carr’s beetle wing dress, designed for actress Ellen Terry in 1888. Over a century later, the fashion designer Alexander McQueen would be inspired by a Victorian wedding dress made of beetle wings, which he discovered during one of his many visits to the archives at the V & A (Fox, 2015, p.355). 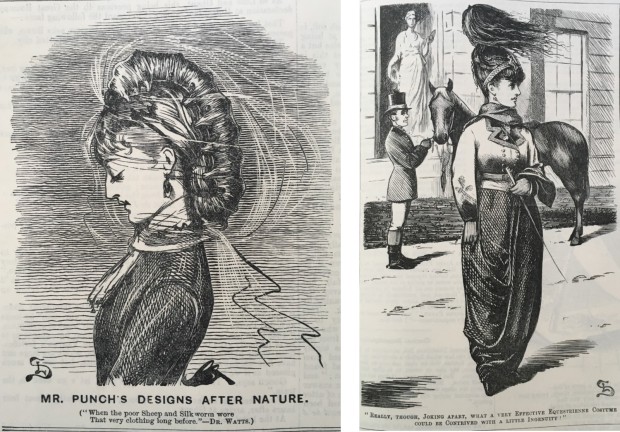 Punch’s illustrations of women ‘fashioned from nature’ were published during a period where the role and status of women were being both debated and challenged. In 1866, the MP John Stuart Mill presented the first mass women’s suffrage petition to the House of Commons and the following year, women’s suffrage societies began to form throughout the UK. The 1864 Contagious Diseases Act and it’s subsequent amendments, which threatened women’s autonomy over their own bodies, inspired further campaigns and protests.

Representations of women in literature were also changing. Sensation fiction writers such as Wilkie Collins and Mary Elizabeth Braddon began challenging the ideal of domesticity in which middle class women were centered within the safe, domestic sphere. Contemporary sensation fiction is full of women who plot murder and/or revenge, who use disguise to transgress class boundaries and who use their sexuality to manipulate men. Although they still have to exist within the patriarchal constraints of nineteenth century society, these women travel beyond the domestic sphere to actively shape their own destinies.

It could be argued that insects and animals represent this world ‘outside’ middle class domesticity. Entomology and taxidermy were both popular nineteenth century pastimes and it was fashionable to display insect collections and taxidermied animals in middle class homes, as well as aquariums and terrariums. However, the natural habitats of these creatures and plants are outside the domestic space. They are literally from ‘the outside’. Therefore, women ‘fashioned from nature’ can be seen as a critique against women’s increasing ‘invasion’ of the public sphere – a place where they are out of place and do not really belong.

Several of Punch’s ‘insect women’ feature insects which were and are still seen as irritating or dangerous. Figure 8 features women dressed as wasps and the caption appears to be a reference to the fashion for using extremely tight corsetry to create tiny waists. Yet it is also worth noting that the criticism ‘waspish’ is often gendered and usually applied to women. In addition, wasps can transcend boundaries to infiltrate the safety of the domestic space and once in, they are difficult to get rid of. Despite their small size, they possess a powerful sting. Braddon’s Lady Audley (1862) transcends class boundaries to ‘infiltrate’ the aristocracy through marriage, and underneath her ‘doll-like’ appearance is a woman who attempts murder to protect her hard-won position. Did the illustrator have Lady Audley (or women like her) in mind when he drew this image? 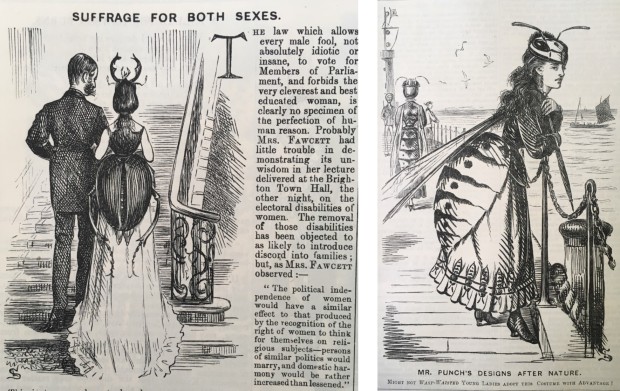 In Figure 7, Punch uses an image of a woman dressed as a stag beetle to illustrate an article on women’s suffrage. This image could in part be a reference to the popularity of using beetle wings in contemporary fashion (an example of dress fabric can be seen in the V & A collections here). However, the illustrator’s choice of a stag beetle, with it’s hard shell and sharp pincers, may have been a reference to the determination of women campaigning for the franchise and their resolute demands for change. Unlike many of the other examples of ‘insect women’ in Punch, this illustration also features a man. Rather than looking horrified at his wife’s fashion, he walks beside her, oblivious to any kind of threat. Consequently, the illustration could be read as a warning to men. The ‘angels of the house’ are far more dangerous than they appear.

If you would like to view our copies of Punch, or any other items from our Knitting Reference Library, please email wsaenqs@soton.ac.uk for more information.

Our books on fashion sustainability can be found at 391.0286.

← Fashion and Sustainability Forum 2018
The Library of Re-Claimed Books →