Display case with items from the collection related to Derek Jarman and Alexander McQueen.

Building on the 2019 ‘Lesbian Voices’ exhibition held in WSA Library during LGBT History month and to coincide with the screening of the award winning film ‘Beyond: There’s always a black issue dear’, iPIC research group directors (Shaun Cole and Valentina Cardo) collaborated with Catherine Polley, Head of WSA Library, to investigate the LGBT material held in the WSA Library. Here, Shaun Cole discusses in more detail the process of curating the exhibition.

Having been using the Library’s varied collections for my own research, to recommend to students for their assignments and for student research methods visits, I was aware of some of the scope for finding material for a new LGBT History month exhibition. Taking an obvious first step, I searched under key terms and various artists whose ‘queer’ sexuality was well known. This revealed a huge range of material for us to work with and turn into something meaningful. We began with some obvious groupings: fashion, art, photography, and politics. As many who curate exhibitions know this initial process is both exciting and frustrating. Some materials seemed to come together into interesting groups; others sat alone and inspired further searches to start to find related materials. It was at this stage that the name for this exhibition occurred, ‘Queering Connections’. The word ‘queer’ raised thoughts of the word’s meaning of ‘odd’ or ‘strange’, the abusive term for homosexual and its late twentieth century reclamation as an inclusive term, rising out of Queer Theory. One of the projects of Queer Theory has been to undo identity categories to challenge the idea of the hetero-normative and traditional sexual and gender roles. Whilst the Library was not an intentional queer collection, Judith [Jack] Halberstam’s identification of the queer archive in their 2003 article ‘What’s that Smell?’ as ‘a theory of cultural relevance, as construction of collective memory and complex record of queer activity’ is relevant to the process of curating this exhibition.

The other obvious challenge in curating any exhibition is the available space. The seven display cases in the Library are not large and we had enough material laid out in Catherine’s office to fill then twenty times over. Deciding that this would be the first of an annual series of exhibitions meant that we could begin to ‘reject’ and whittle down the material to end up with four groupings that would fit into the available space.

Display case with items from the collection related to Cecil Beaton.

The first grouping focuses around photographer, costume designer, interior designer and diarist, Cecil Beaton. Initially inspired by the 1994 video box set of the 1964 film ‘My Fair Lady’ for which Beaton designed the costumes, this perhaps obvious connected grouping includes Christopher Tinker’s book Speak its name! with a quote from Beaton about his love of women and his sexuality and two books of Beaton’s photographs that link the costumes worn by Audrey Hepburn  in  ‘My Fair Lady’ to queer ballet dancer Rudolf Nureyev. The shirt worn by Nureyev in Beaton’s photograph resembles the eighteenth century fancy dress costumes worn by artist Rex Whistler and the other ‘Bright Young People’ in the 1920s in Terence Pepper’s Beaton portraits. This queer use of clothing links finally to quotes from Beaton about his own ‘homosexual’ dress aesthetic in Shaun Cole’s Don we now our gay apparel.

WSA Library holds an extensive collection of the creative collaborative ‘magazine’ Visionaire. Number 58: Spirit is a tribute to fashion designer Lee Alexander McQueen following his death in 2010. Embedded into its pages are wildflower seeds that when planted and watered will blossom into a garden. This led us to the second grouping and two connections. Firstly, to the image of the butterfly headpiece designed by milliner Philip Treacy for McQueen’s La Dame Bleue, Spring/Summer 2008 catwalk show in David LaChapelle’s book, Heaven to Hell (2010) and the link to Moth by John Dilnot from our Artists’ Book Collection. The transformation of caterpillars into butterflies and moths as they break out of their chrysalises is often compared to the process of coming out undertaken by LGBT people. Secondly, the idea of the ‘flowering’ of this Visionaire led us to the queer artist and film director Derek Jarman, particularly through the book Derek Jarman’s Garden and DVD of his The Garden (1990).  Both celebrate in different ways his well-known garden at Prospect Cottage, on the beach at Dungeness, Kent. Compiled at Prospect Cottage in 1996, Derek Jarman: reliquary is a limited edition box containing amongst other things poppy seeds, a “Dungeness” stone charm, poem ‘The Sunne Rising’ by John Donne and a section of the original film of Jarman’s 1993 film Blue. This grouping ends with the DVD of Blue.

A second copy of Visionaire , Number 13: Seven Deadly Sins was suggested by Catherine to accompany two works which include writing by the openly bisexual American experimental writer Kathy Acker. The book The Seven Deadly Sins, edited by Alison Fell contains an essay on lust by Acker. The images in the ‘Lust’ booklet of Visionaire 13 were taken by photographer Mary Ellen Mark, whose early work in the mid-1960s included recording New York’s trans community. Acker’s essay ‘Seeing Gender’ introduces the book Feminmasculin, le sexe de l’art, that accompanied a 1995 exhibition at Paris’s Centre Georges Pompidou, that showed work that ‘blur[red] the biological, anatomical and cultural fatalities traditionally linked to sex.’  The theme of gender representation is also key in the photographic work of gender-queer artist Della Grace (now known as Del LaGrace Volcano) featured in Nothing but the girl the blatant lesbian image, a portfolio and exploration of lesbian erotic photography.  The importance of self-image and identity, both represented and discussed by Grace, is also addressed in Vicky Karaminas’s essay ‘Born this way: Lesbian Style since the eighties’ included in A Queer History of Fashion. The groundbreaking film Paris is burning (1990, directed by Jennie Livingston) charts the lives of the African American, Latinx gay and trans people involved in New York’s ballroom culture – now the subject of the television drama series, Pose – and connects back to Mary Ellen Mark’s early photographs. The image on the open spread of Karaminas’s essay was taken on a pride march and the photographs in the ‘Pride’ booklet of Visionaire 13 illustrate New York City’s LGBT Pride parades. 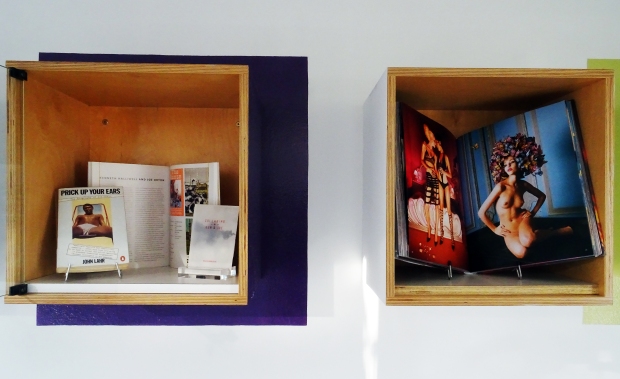 Also from the Artist’s Book Collection is poet and artist Jeremy Dixon’s 2014 tribute to the gay playwright Joe Orton and his lover, Kenneth Halliwell. Dixon’s limited edition publication, Collaging Ken & Joe celebrates the ‘vandalism’ that Orton and Halliwell committed to books in Islington Library, collaging new book covers, for which they were sentenced to prison. These now celebrated book covers are pictured and discussed in the catalogue of Tate Britain’s 2017 exhibition Queer British art: 1861-1967. Orton records this in his biography Prick up your ears, written by John Lahr and in the 1987 film of the book, directed by Stephen Frears, both of which are included in the exhibition.

Whilst by no means a comprehensive coverage of the LGBT related collections held in WSA Library, ‘Queering Connections 2020’ offers an insight into what is held and provides a starting point for staff, students and external visitors to begin to make their own connections between the rich and varied materials.

The exhibition runs 13 – 29 February 2020 at Winchester School of Art Library. Free and open to all.

← Party time! A festive celebration of knitting from the collections at WSA Library.
“There are no bad pictures; that’s just how your face looks sometimes.” – Abraham Lincoln →